The History of N Battery (The Eagle Troop) 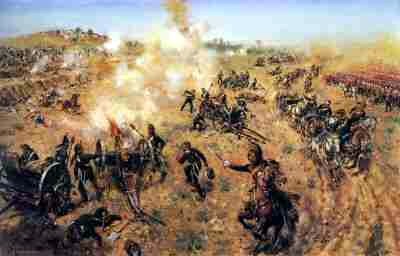 N Battery (The Eagle Troop)
The history of N Battery begins on 11th November 1811 where, at Seroor, the 1st Troop Bombay Horse Artillery was formed. British reverses in Afghanistan and increasing troubles in Baluchistan later led to deterioration in relations to the point where British troops were coming under attack from Baluchi marauders and it was decided that Sind should be annexed.

In 1842, Sir Charles Napier was sent to Hyderabad with a new treaty that was so stringent that it was never going to be accepted by the amirs of Sind.  In response, on 15th February 1843, the British Residency was attacked.  To Napier, this was cause for war and, eager to strike first with a telling blow, he attacked an army of some 22,000 Baluchis with the 2,800 men (including the guns of 1st Troop) at his disposal.

The armies met at Miani on 17thFebruary 1843 when the Baluchis attempted a series of charges at the British line.  Under intense pressure and overwhelming numbers, the British line held firm, allowing Napier to turn the Baluchi’s flank by a charge from the 9th Bengal and Scinde Horse, supported by the 6 guns of the Troop.  It was estimated that the Baluchi losses ran to a figure above 5,000 and the British had lost but 256 men.  The following day many of the amirs surrendered, allowing occupation of Hyderabad by 20th February 1843.

In 1901 N Battery had the honour of bearing the coffin of Queen Victoria.

At the outbreak of the First World War, N Battery deployed to France and fought in many actions, including the battles of Neuve Chappelle, the Somme, Cambrai and Hailles.  N Battery claimed the highest number of rounds fired in one month   by one Battery when in August 1917, the six guns fired 115,360 rounds in support of the Canadian Corps.  N Battery remained in the thick of the fighting until the signing of the Armistice.

In 1920, N Battery had the honour of bearing the coffin of the Unknown Warrior to Westminster Abbey and the Coronation   of King Edward VII.

On 11th May 1938, N Battery became mechanised and was amalgamated with L (Néry) Battery RHA to form a Field Battery within 2 RHA.  It was as L/N Battery that it returned to France in 1939 at the outbreak of the Second World War as part of the British
Expeditionary Force and fought in France until it was evacuated at Dunkirk in 1940.  The Battery later went on to serve in Greece and in the Western Desert.  In 1942, the Battery regained its separate identity and joined 6 RHA with whom it served the rest of the war in the UK.

On 1st February 1958, the Battery ceased to be part of the RHA and became retitled N Battery (The Eagle Troop) RA.

In September 1965 N Battery (The Eagle Troop) moved to Portsmouth Barracks, Münster and stayed there until January 1968 when it moved back to Bernard Castle, Yorkshire.  It served there until 1977 and during that time it conducted two emergency tours of Northern Ireland.  The Battery then moved to Ubique Barracks, Dortmund for a short time before taking position as the support Regiment at the Royal School of Artillery, Larkhill.

The wheel then turned a full circle when the Battery returned to Münster in 1982 to serve with 4th Brigade.

On 1st July 2006, N Battery (The Eagle Troop) RHA regained its separate identity and was moved back to 3rd Regiment Royal Horse Artillery in Hohne, Germany.  It is now the formation reconnaissance Battery supporting the 9th/12th Lancers.

This photo shows D sub-section, Eagle Troop in Secunderabad in 1914and was donated by Dave Whichbold. It contains a message on the back which suggests it was sent as a postcard. I think the sender was Arthur Bird and he is in the photo the message is shown below the photo.

I am not sure of the connection between this Eagle Troop and  N Battery as I understand that the "Eagle" title wasn't awarded until later. Pending clarification. 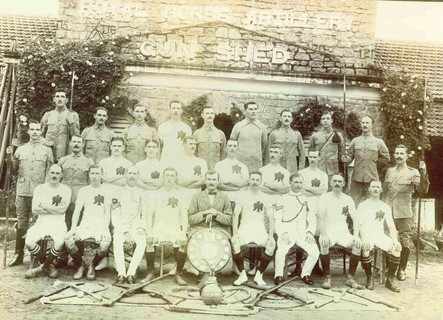 "My dearest sister Herewith photo of my sub section. I have put a mark on myself soyou will see that I have got the stripe again. My dearest sister i have posted this on the off chance of you getting it as we are mobilizing and we are apt to go to the war any minute so do not write again until you hear from me. Both myself and George are for it just write and tell mother. Tell her not to worry no more than she help as with God's help we will pull through alright excuse this as there is no time for nothing. Well dearest sister good bye give my best love to all. George sends his best love to all. Goodbye.(underlined)

Arthur Bird is possibly in the 2nd row on the left, he has a single stripe and there is a pencil mark on the card mount next to him.
Fredrick Bradshaw
Fredrick Bradshaw, was in the RHA; Bulls Troop first, and later in Eagle Troop in India from 1932 to 1938.
His great nephew Dick Bradshaw received a number of items in a bequest from him which will be of interest to many "Eagles" I have included them on this page as it is a little piece of Eagles history. I am in contact with Dick Bradshaw through email and if anyone wants to gain further information about the following images please get in touch. 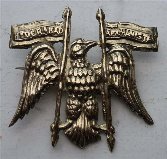 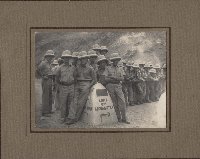 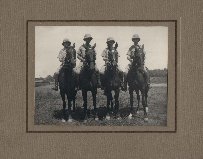